StageNow is based on the idea of Rapid Deployment. Using barcodes scanned into StageNow client (with a new possibility of using NFC tags) you can setup wireless connectivity and stage mobile device with all necessary settings and applications. In addition, it is possible to do both OEM OS updates, wipe devices, enroll them to an MDM, change system settings like regional settings, certificates, system time, etc.

StageNow client will be preinstalled on devices with Android KitKat marketed during 2015. For staging devices with Jelly Bean will be possible to use the original Rapid Deployment Client that some features / options here will not be supported.

StageNow server will be available free of charge. Install will require just desktop Windows OS, not a Windows server.

StageNow is not intended as an MDM system, but only as a tool to ease the initial device staging.
StageNow will not support mobile devices with Windows Mobile OS (WinCE / WM) or devices from manufacturers other than Zebra.

On December 5th, 2014 Zebra will terminate sales of Motorola / Symbol AP650, AP-6532, AP-7131N AP-7161 and AP-7181 access points in EU. Additionally, on January 15, 2015 will be terminated sales of AP622 and AP621 access points.
It means that Motorola Dependent APs, ie. access points which cannot function without an RF controller, will completely disappear from the market. Many new customers will not probably buy an RF controller although it still has sense escpecially because:

Zebra announced the official closing of the transaction of the Enterprise business of Motorola Solutions. Effective immediately, these two organizations are operating as one company, under the Zebra Technologies name. And Motorola staff already have e-mail addresses at the zebra.com domain and modifying profiles on Linked-in ... 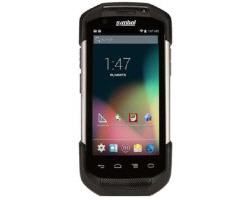 Following the ET1 tablet, handheld terminals MC40, MC67 and MC3200, TC55 industrial phone and CC5000 multimedia kiosk Motorola (now Zebra) with a great welcome event announced on October 21, 2014 a new mobile device - Symbol TC70 with Android operating system. The labeling can be seen in continuity with the popular MC70 series and a return to the old well-known mark Symbol - now it will be used on scanners, mobile devices and Wi-Fi products from the Zebra.

If you hold the Symbol TC70 in your hand, you feel that it is an overgrown phone (but it is not a phone!), or rather a smaller tablet. In any case the device is durable enough for use in an harsh enterprise environment.

TC70 accessories will be rich: 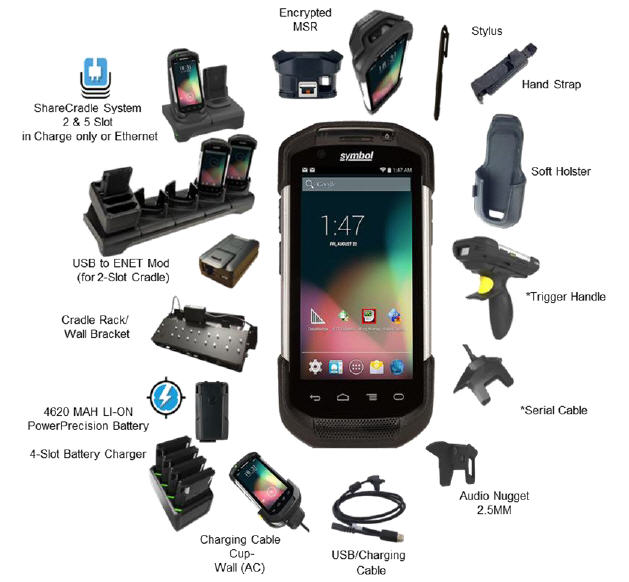 Ordering of TC70 should be possible since November 2014. 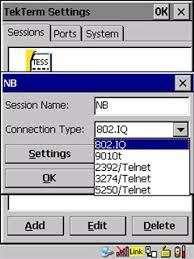 It should work on all other Motorola devices running supported OS. The TekTerm Client supports ANSI, VT-100, or VT-200 and IBM 5250 or 3270 emulations with a maximum of 8 sessions whether it is connecting directly to the host application or through the Communication / TekTerm Server 9500, 9510 or SW95xx. TekTerm Client also provides features such as various fonts, font colors, and screen sizes, as well as SSH secure connections.

The demo version of TekTerm Client v7.0 can be downloaded here. After 30 minutes a pop-up message appears warning the user that this is a demo version and the connection to the host is then disconnected.

TekTerm does not control or configure the scanning of a device (like Wavelink TE does). Scanner must be utilized via DataWedge (Motorola) or Scanner Service (Psion).

TekTerm is not available for Android or iOS.

After 3 years I finally created my second video presentation showing you the barcode staging of Motorola mobile devices. See below (in Czech):

Presentation of Motorola history and products 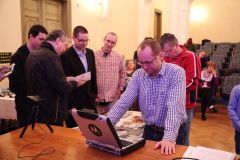 On Saturday, May 17, 2014 I attended lectures and exhibitions on the history and present of Motorola company in the Museum of West Bohemiain Pilsen. An ardent enthusiast Pavel Mašek presented the founders of Motorola and the products of this company since its inception brought to market. There were also mock and exhibits functional phones including Iridium satellite phone, rugged laptops, radios and various contemporary promotional items and flyers. Participants had the opportunity to meet with current Motorola enterprise products like mobile terminals and Wi-Fi networks. Internet access (hotspot) for the event was delivered by Motorola RFS4000 RFcontroller with AP650 access points.

More info (in Czech) at www.staredobrecasy.cz.

Three years on the market

On May 2, 2014, three years have passed since the moment I decided to leave the security of employment and venture into the uncertain waters of freelancing. The decision was not easy that time, the beginnings were not too easy, but in retrospect it was the best thing I could do. And I'm glad I did! During that time I got to many interesting projects and customers. I'd like to thank them, as well as Motorola Solutions UK that had the courage to work with me and after a while found that cooperation is mutually beneficial - or at least I hope :-) Thanks again!

In April 2014 Motorola released the new series of firmware for their Wi-Fi controllers and access points denoted as Wireless New Generation / Wi-NG 5.6.

What are the major news:

Wi-NG 5.6 is currently not supported on the new Motorola NX7500 RF controllers.

In the middle of April 2014 Zebra Technologies announced to buy enterprise division of Motorola Solutions for $3.45 billion. Zebra plans to fund the deal with about $200 million of cash and $3.25 billion in new debt. An interesting fact is that the worth of Zebra Technologies itself is $3.4 billion only and it is significantly smaller that Motorola's enterprise division. About 4,500 Motorola employees will join Zebra when the deal is finished. It should happen until the end of 2014.

The deal leaves Motorola with only its government-services unit and iDEN network technology.

Technology experts and Motorola's employees have generally a positive undestanding of this deal. Zebra's traditional portfolio, bar code printers, will be supplemented by the barcode readers and enterprise mobile devices. And I would add a bit of nostalgia, it will overwrite the third one brand: Symbol > Motorola > Zebra.