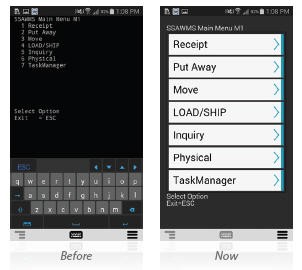 Recently, Wavelink released the first version of their new terminal emulation software called Wavelink Velocity for mobile devices running Android Jelly Bean and KitKat. Velocity fully leverages multitouch displays by taking the text-based information from the host system and converting it automatically into an intuitive mobile experience that is easy to navigate and use. For the first year of sales Wavelink has an exclusive agreement with Zebra that this software will be offered only for Zebra / Symbol mobile devices.

Like the legacy Wavelink TE client Wavelink Velocity also supports session persistence via Wavelink ConnectPro, license management via Wavelink License Emulation server etc. Speakeasy voice technology is not yet supported, but it is planned for the future.

The same software is also available through the Zebra channels as All-Touch Client. The product will be supported on the following Android devices: MC32xx, MC40, MC67, TC55, TC70, TC75 and ET1.